My duty as scribe for Troop 236 in June and July includes writing a newsletter explaining what has happened this month. Troop 236 had many events happen this month. These events include our final troop meeting until September, our spring Court of Honor, the 10-mile canoe trip, our troop picnic, as well as many others. Also, congratulations to Ryan Gelsinger on his Eagle award. Below is more information on each event that happened in these months.

Court of Honor: We had over 15 rank advancements as well as over 30 merit badges awarded at the Troop 236 Court of Honor on June 19th. Unfortunately, only 22 scouts showed up out of the entire troop. This means that at least 40 scouts missed this. The troop Court of Honor lasted about an hour and fifteen minutes. The Black Frog Award as well as the Golden Paddle Award was awarded. The Black Frog Award is given to the person who does the most publicly humiliating or stupid thing throughout the year. The Black Frog Award was given to Bryan Dickson for when he thought a very large and low sink was a toilet at Wildwood, New Jersey and decided to go in it. There was a sign clearly stating that is [sic] was in fact a sink but Bryan didn’t see it. Bruce Perry also won a service award for his continuous dedication and help for Troop 236. Congratulations. In conclusion, the court of honor included special awards, merit badge awards, and rank advancements.

10-Mile Canoe Trip: The canoeing trip was a lot of fun. About 16 scouts went on this trip. The weather was very poor overall for the trip. I have heard that poor weather happens to the this troop often. On Friday night it rained almost the entire time we were setting up. The weather on Saturday was very cloudy until late Saturday afternoon. The clouds then started to break up but then it became cloudy again on Sunday morning. We canoed 18 miles from Lander’s to Point Eddy. We canoed on the Delaware River and everyone had a great time. No “river pirates” showed up at our campsite too. Out of about 23 people that went on the canoeing trip, only 6 capsized. The people that did capsize included my father, Austin Farnsworth and Mr. Farnsworth, Greg Holman and Bryan Dickson and me. I apologize if anyone else did capsize on this trip and I forgot the incident. On this trip, Mr. Maguire gave the Golden Paddle Award to Bryan Dickson and Greg Holman. The Golden Paddle Award is given to whoever does the most humiliating thing on the canoe trip. The water was very cold so no one wanted to jump in it. We decided to do a different part of the Delaware River, which from what I heard, was better than the old part Troop 236 used to do. Almost the entire troop slept in lean-tos for the night except for a few adults and scouts. Everyone had a great time and no one got hurt so it was overall a pretty good trip.

Philmont Trip of 2006: Troop 236 had about two-dozen scouts go on the Philmont trip of 2006. This trip involves a 50-mile hike around a Boy Scout reservation in New Mexico while participating in many activities and events. This is a 2-week trip. Even though I did not go to Philmont, I heard everyone had a great time despite the constant rain. I heard from one of the adults that they saw many deer, no bears, heard a rattlesnake, and saw many mini-bears, which are really just very large chipmunks.

Troop 236 Picnic: Troop 236 had their annual picnic on June 21st. For the most part, the scouts had a huge water gun fight. The scouts also played football and frisbee. This picnic is a gathering of all the scouts and their families. On this picnic, it is customary to vote for the new senior patrol leader as well as the new Order of the Arrow members. Congratulations to whoever is the new senior patrol leader and the new Order of the Arrow scouts. The picnic lasted about 3 hours and everyone had a great time.

Ryan Gelsinger’s Eagle Court of Honor: Great job, Ryan Gelsinger! Ryan Gelsinger achieved Eagle a few weeks ago. His project was making a walking trail on town land. This court of honor happened on June 17th at 1:00 P.M. Congratulations on your eagle award, Ryan Gelsinger. It takes a lot of hard work and determination to achieve Eagle.

Community Service Project at Allamuchy State Park: 5 scouts and 5 adults took part in the service project on July 22. This project was building an information kiosk for a new bike trail at Allamuchy State Park. It was hard work but the scouts had fun when they climbed up a 120-foot high tree. I hope the project was completed because my father and me had to leave early. Each Scout earned over 3 hours of community service. This will help them with rank advancements due to the requirement that you must have six hours of community service to achieve the rank of Star. I think everyone had a great time even though it was hard work.

Summer Camp: Troop 236 went to a Scout Reservation for a week at summer camp. This summer camp allows the scouts to earn rank advancements, rank requirements, and merit badges too. The scouts had a lot of fun but at the same time worked very hard. There are many activities to do at this camp. The scouts can complete many Eagle required merit badges. There were more young scouts that went to summer camp than older scouts due to the fact that older scouts have already completed many of their merit badges and only need a few more. They would have too much time of their own at the camp. I heard from adults that every kid had a lot of fun and many look forward to going back next year.

In conclusion, I hope this newsletter has provided you with some basic information about what happened in the months of June and July for Troop 236. Thank you for reading this newsletter. 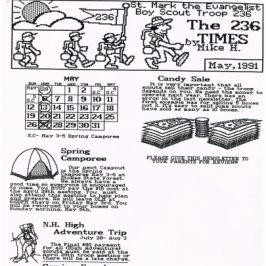 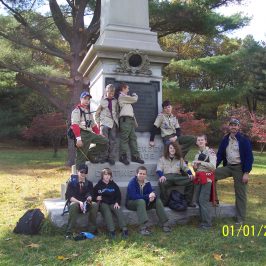 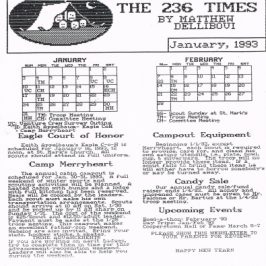 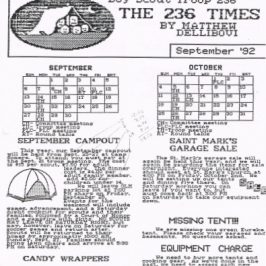 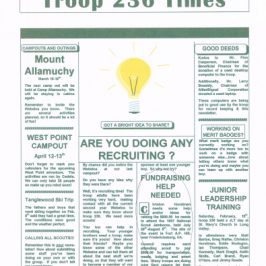 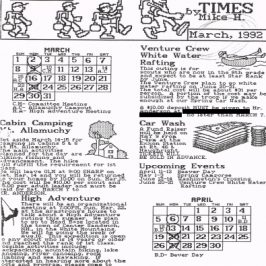